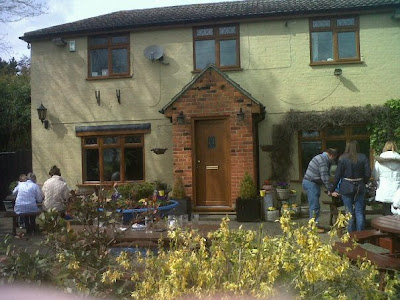 Alma Arms Pub is a great site in which you can breathe the classical English countryside atmosphere in Navestock in the County of Essex enjoying a beautiful cocktail of nature, historic towns and picturesque villages surrounded by typical verdant low hills in a beautiful environment highlighted by very pleasant landscapes completed by huge forests and of course finding there a wide range of attractive places with the splendid chance to spend a very enjoyable day having a drink or a delicious meal.

That traditional establishment is located in a tiny Parish and neighbourhood of Brentwood in the South- East of England and it lies in a rural village situated at just one hour driving from Central London, a place which was in the Middle Ages an important agricultural centre and former settlement of the district of Ongar until 1974, year in which Navestock was absorbed in the current municipality following the local  government reforms.

Very interesting in its boundaries is the visit of a medieval Church situated in an isolated position approximately one mile further north from Navestock Heath also well known to be a historic site closely linked to that traditional English sport called Cricket played there since 1800 at Navestock Side.

In addition you can admire Abbotswick, a small country house standing in a garden with a small pond, a building  patrimony of Essex culture  elevated in 1800 and described as residence of Adam Chadwick in 1817 totally rebuilt in the 20th century.

Alma Arms is a great and ideal haven for everyone escaping from the metropolitan stress enjoying a break for lunch or dinner in that beautiful British corner.That traditional Gastropub opened its doors in 1970,originally it was a typical English house erected in 1731 and in the bar lounge you can admire some original furniture related to that period.

The name Alma Arms derives from the historic battle on the River Alma situated in Crimea, former land of the Soviet Union in which in 1854 the Anglo-French Army led by Lord Raglan alias Fitzroy James Henry Somerset well known as 1st Baron Raglan defeated the Imperial Russia. The  establishment  has a very cosy atmosphere, the interior is arranged along a hallway flanking an ample bar in a very luminous space.

Great and functional is the layout with tables and chairs placed in different rooms and a fine fitted carpet completing a charming and welcoming environment.

The staff is very friendly and the food quality is really very good and tastefully.You can taste there all the most traditional English plates including several kinds of homemade pies such as Steak pie, considered one of the most popular choices of the menu ,Shepperd's pie, Chicken & mushrooms pie and Stilton pie among others.

Next to all those delights the list is furthermore characterised by a wide variety of gastronomic specialities such as grilled Scotch Sirloin steak, Minted lamb shank,Cajun salmon fillet, Fried breaded seafood Platter really excellent are also Scampi, Scallops & Whitefish fillet part of a large selection of delectable alternatives.

You will also find a cosmopolitan and nouvelle cuisine touch in the menu with the exotic Indian Chicken Balti and Lamb Madras or if you are fond about Mexican food try a tastefully and spicy Chilli con carne. In the case you are a Far East gastronomy lover a Green Thai chicken is another exquisite option and a classical and superb  Italian homemade Lasagna is a further one.

Also that is certainly a considerable detail if someone desire ethnic cuisine which is today something highly  appreciated in a menu à la carte which offers the opportunity to taste several kinds of flavours so loved by a multitude of people next to the most traditional local dishes.

Regarding desserts you can simply choose from a long list of typical national specialities such as English Sherry trifle,Cheesecake,Spotted Dick, Bread & Butter Pudding, Fruit Crumble or Toffee Apple Pancake among others.

Excellent is also the offer about drinks. British ales beers are very well represented by Abbot Ale,Old Speckled Hen and  Greene King IPA with a further wide selection of international beers such as Guinness icon of Ireland, Carlsberg emblem of Denmark, the famous Foster from Australia and including the notorious Spanish San Miguel.

The Pub also boasts a superb range of of international wines as a a fine Claret Bordeaux from France,supreme Italian icons from Veneto as a sublime a Valpolicella Vitis Nostra or a selected Pinot Grigio del Veneto. If you are looking for something else you will have the chance to taste a smooth Spanish Rioja Tinto or for very fine palates a a fresh ,light youthful French Champagne Louis Dornier et Fils.

The establishment provides outdoor tables and parasols perfect to sit outside in a sunny day and the presence of a parking facing the building is a further available facility very appreciated.

Navestock-Brentwood is a a brilliant oasis of peace, ideal for great excursions enjoying splendid  landscapes in that appealing classical English countryside atmosphere with that  unique chance to be delighted by excellent food in a cosy environment surrounded by an uncontaminated nature and also with the option of playing golf because in the immediate vicinity there are 3 Golf courses with furthermore the opportunity to practise another brilliant outdoor activity as horse riding as well.

If you are planning a tailor made tour in future visiting Southern England, I added below some links which could be useful to check places to visit organising your stages in different sites and I indicated some accommodations in the case you are interested to stay not far from that area.

A stop in that establishment is undoubtedly very suggested, it could be a great combination for all people who love those activities previously mentioned before or after a delectable meal at Alma Arms Pub,the right place to enjoy a beautiful and peaceful corner of Essex in which the main protagonist is the the most classical English countryside atmosphere.


Hotels in the area

Distances from some key points

Thanks a lot to read and note.